The Jewel (The Lone City #1) by Amy Ewing - Book Review

The Jewel (The Lone City #1)
by Amy Ewing

Violet Lasting is a young girl from the Marsh. As a young girl in the Marsh, she must be tested for the genetic abnormality that gives her the ability to be a surrogate for the Royals in the Jewel. The Jewel is a place of wealth and  and exquisite beauty. The royal women discover they are unable to carry an heir to term and survive it. The only way to carry on the royal blood is to have a surrogate grow the heir.

Violet is sent away to a school. There she is trained as a surrogate and her special powers are developed to their fullest potential. Once she completes her schooling, she attends the big day, the Auction.

At the Auction, Violet is stripped of her identity. She is now known as #197. She is dressed beautifully and placed on a stage to be bid on by the royal women. She is one of the most sought after surrogates due to her beauty and her high scores in school. The Lady of the Lake bids the highest and is now her owner.

Violet has difficulty adjusting to life as a surrogate. She meets Ash, a companion for the Duchess's niece. Violet has never met anyone like him. How can she feel this way when she is destined to bear a royal child? What will happen to them if they are discovered? There has never been a surrogate that has escaped, what choice does she have?

The Jewel had great potential. I was really excited to read this book based on the blurb and the cover. The cover of this book is stunning. I like the plot, but it just didn't leave me longing for more. Violet's character is well developed and likeable. The Duchess made me angry enough that there were times I wanted to punch her in the face.

I had a hard time following the idea that the surrogates had the power to change living things (i.e. a tree, a fetus, etc.). The pain caused by such changes seemed unnecessary and did not add to the story. Violet suffered from nose bleeds and migraines every time she attempted this, yet it was expected of the surrogates to perform in this way.

I cannot imagine treating my surrogate with anything but respect and kindness if I were to have one. The Jewel sees the surrogates as a type of slave. The royals in the Jewel have a sense of entitlement for the womb of these surrogate girls. Even with their child and heir growing inside of them, they are treated like scum.

The story held my attention long enough for me to finish it. The ending left the reader with unanswered questions. I can make the assumption that these are addressed in the next books in the trilogy. I would like to know how the series is resolved, so I may eventually read the next book. For now, I will take a break from the Jewel.

Disclaimer: I purchased this book during a buy 2 for the price of 1 sale through Audible with my own money. I chose this title and one other. The opinions stated above are my own.

For your convenience, you can purchase a copy for yourself here! Once you've read, let me know your thoughts. Enjoy!

All We Ever Wanted by Emily Giffin: Book Review 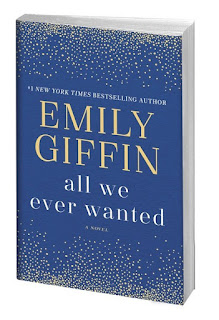